The U.S. Agency for International Development and other donors are designing programs to address the growing crisis in Central Mali. The Mopti region requires particular attention for both economic and demographic reasons. Mopti is one of Mali’s primary agricultural and commercial hubs, and home to much of the country’s Fulani people, a largely pastoralist ethnic group spread across Burkina Faso, Guinea, Mali, Niger, Nigeria, and elsewhere. Unexpectedly, Al Qaeda has emerged as a real threat in the area, using new alliances with domestic violent extremist and insurgency groups to shed its label as a Tuareg-aligned violent extremist group active primarily in the North. Before programming begins, however, we need to take a closer look at Al-Qaeda-linked violence, and also understand and address the central role that local ethnic armed groups are playing in Mopti today. 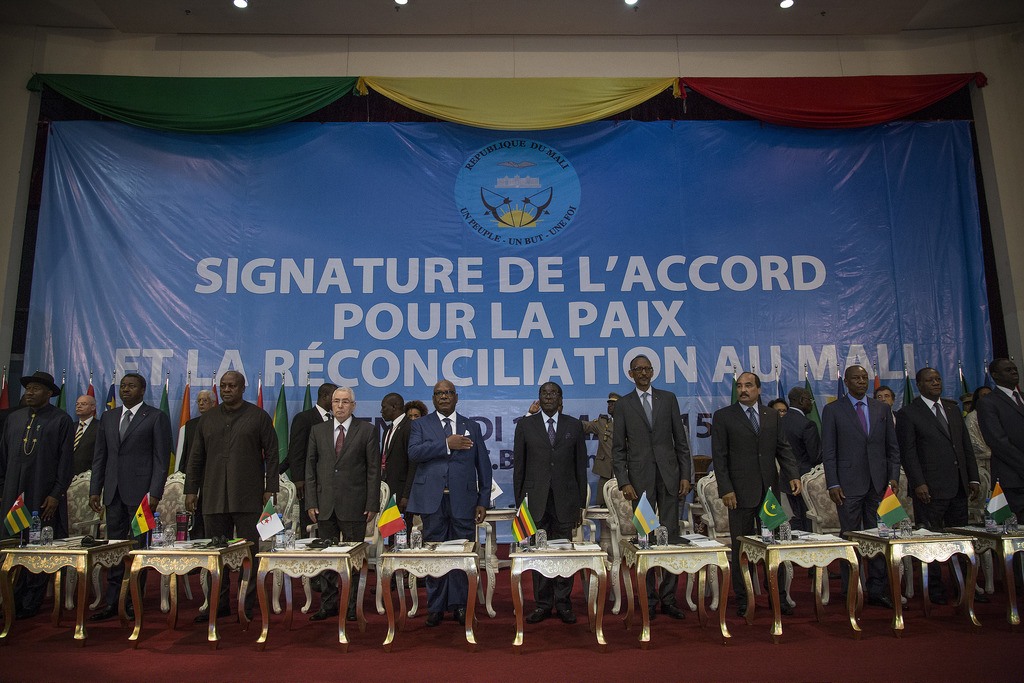 Representatives stand to open the Mali Peace Accord signature ceremony.

Al Qaeda in Mopti—A Look at the Numbers

Using data from the Armed Conflict Location and Event Data Project (ACLED), we first confirmed our perception that there has been an uptick in violence in Mopti in recent months. ACLED recorded 68 attacks by violent extremist organizations and ethnic armed groups in the region from January 2013 to February 2017, resulting in 214 casualties. In March, Al-Qaeda dramatically strengthened its strategic position in central Mali, securing high-profile alliances with three other violent extremist organizations: Ansar al Din, Massina Liberation Front (a primarily Fulani group with strong influence in Mopti), and al-Murabitoun. The new group, known as Jama’at Nasr al-Islam Wal Muslimin (JNIM), functions as Al-Qaeda’s official branch in Mali. Since the creation of JNIM in March, there have been 57 violent events in Mopti, resulting in 153 casualties—an increase of 1,800 percent per month.

It’s not much of a leap to attribute this escalation to the creation of JNIM. ACLED reports that since March, JNIM and its affiliates have carried out 29 attacks in Mopti, more than the prior 50 months combined. JNIM is now attacking targets in Mopti at a rate of more than four times per month, whereas before we saw one attack every three to four months.

So This Is An Al-Qaeda Problem, Right?

Surprisingly, while JNIM has claimed 50.8 percent of the attacks in Mopti since March, it is only responsible for 30 of the reported 165 fatalities, or 18.2 percent. In contrast, local ethnic armed groups—Bambara, Dogon, and Fulani ethnic militias, as well as unidentified armed groups, vigilantes, and communal militias—have been responsible for the majority of the mass casualty events in the region. For example:

While JNIM and Salafi-Jihadist radicalization are important factors in central Mali’s changing landscape of violent extremism, the increased activity of ethnic armed groups in Mopti is an equally important part of a disturbing story: security and stability is deteriorating in “the center” not because of a single group or event, but because of a breakdown in social order and cohesion in one of Mali’s most populous regions.

This multifaceted scenario raises important questions for countering violent extremism and stabilization program implementers in Mali. Does the founding of JNIM mean that a genuine Salafi-Jihadist ideology has taken hold in central Mali’s Islamist-inspired insurgent groups? Is JNIM a tactical alliance designed to take advantage of an already deteriorating situation in central Mali? Or has JNIM’s increased rate of attack in fact opened the space for more violent ethnic armed groups? What are the drivers of conflict for the increasingly active Bambara, Dogon, and Fulani militias, and how do their interests align or conflict with JNIM? With Al-Qaeda and the Massina Liberation Front joining forces in Mali, what are the broader implications for radicalization and security across West Africa’s Fulani belt?

We don’t yet have the data to answer all of those questions. But as practitioners, it is important for us to understand and account for these complex dynamics in our programming, as we work to mitigate conflict and build resilience against this complex, newly powerful web of violent actors in central Mali.