One of the most acute challenges of working in conflict zones is differentiating between “legitimate” conflict actors and extremist groups. In countries such as Libya and Syria, state collapse has led to a proliferation of armed groups and institutions—all claiming legitimacy and exerting authority over populations. Among these are groups that most observers consider “extreme” in that they are internationally recognized as terrorist groups or they use terrorist tactics to coerce populations.

Development practitioners are tasked to work within and around these conflict environments, often with the goal of building up the legitimacy of preferred parties while marginalizing extremist groups. The challenges here are hardly academic: witness the media uproar over British donor funds allegedly finding their way into the hands of extremists in Syria. It is essential for development professionals to understand the distinction between legitimate conflict actors and extremist groups. But how? 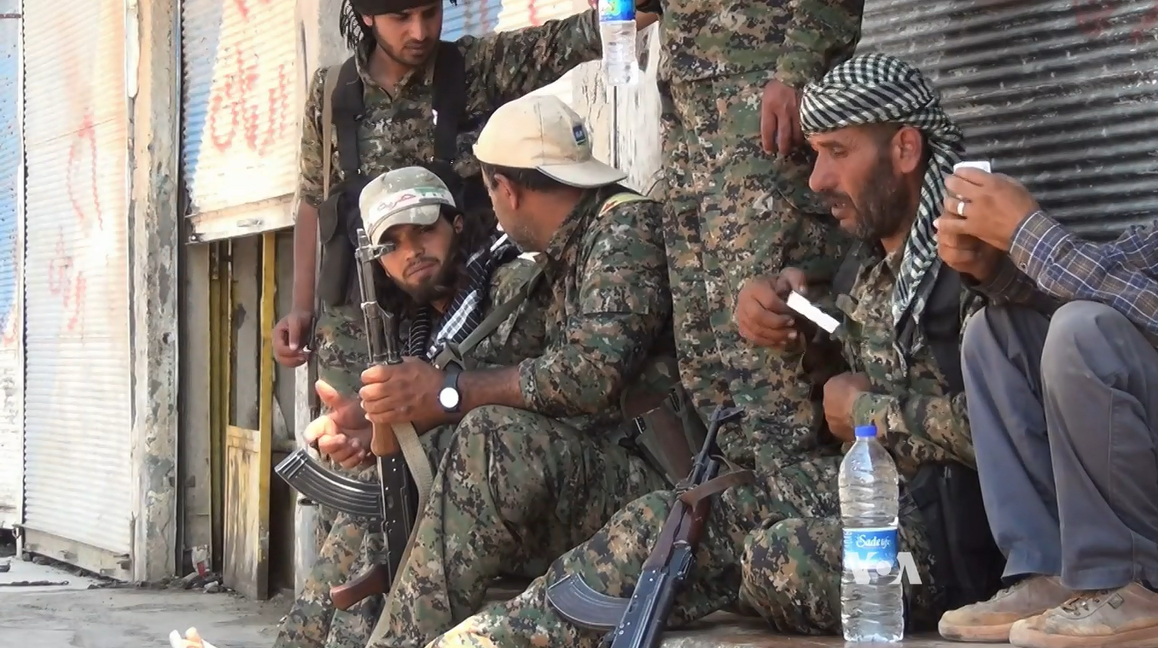 Members of the Free Syrian Army and the People’s Protection Units in Tall Abyad, Syria, on June 24, 2015. Photo: Voice of America

The easy answer is that extremist groups are on the U.S. State Department’s list of Designated Terrorist Organizations. This list is well known in development circles and international programs are all too familiar with the laborious vetting required to ensure that donor funds do not intentionally or unintentionally end up benefiting extremists. However, this list hardly includes all the world’s extremist groups and while compliance with this list is necessary, it is not sufficient to ensure that our activities do not benefit extremists, particularly in complex environments where groups and alliances are constantly in flux.

In my mind, there are two ways to approach this problem. One is a normative approach: extremist groups exhibit certain behaviors. Unfortunately, these models are often too general to apply in complex conflicts. For instance, if we apply USAID’s definition of extremism—”advocating, engaging in, preparing, or otherwise supporting ideologically motivated or justified violence to further social, economic and political objectives”—nearly all conflict actors would qualify because they are pursuing political or other agendas.

A better approach is an empirical one, where we look closely at complex conflicts and identify behaviors that typify extremist groups and distinguish them from other conflict actors.

A new monograph, “Conflict, Violent Extremism and Development: New Challenges, New Responses,” attempts to do just that. The paper (Glazzard et al., 2017) seeks to answer the question of whether violent extremist groups (in this case, Salafi jihadi groups) are different from other conflict actors and if they require different responses from development practitioners.

To do this, the researchers examine three case studies to compare Salafi jihadi groups with other conflict actors in terms of their “aims, motivations, objectives, drivers of radicalization or recruitment, use of violence and tactics, and their relationship with conflict.” If Salafi jihadi groups are indeed wholly distinct from other conflict actors, this analysis should allow us to pinpoint how exactly they are different and how they should be addressed.

The first chapter examines theories of violent extremism and their application to Salafi jihadi groups—greed or grievance, the role of ideology, social identity, and rational actor models of terrorism. No new ground is broken here but it’s a good overview of the current debate on theories of extremism.

Central to the research are three case studies on Kenya, Nigeria, and Iraq/Syria, selected because Salafi jihadi groups are active in all three and each country represents a different level of conflict, with Kenya being low and Iraq/Syria being high. Examining the factors listed above, the researchers plot each group on a spectrum from “strategic conflict actors”—what we would understand as traditional conflict actors—to “cosmic (Salafi jihadi) groups”—what we would call extremist groups.

The study concludes that while much of the academic and policy literature suggests a clear and predictable typology distinguishing between extremist groups and other conflict actors, the reality is a hot mess. The case studies show that both traditional conflict actors and extremist groups adopt a variety of objectives and methods. For example, Salafi jihadi groups often make ethnic or nationalist claims to bolster their support. Traditional conflict actors sometimes adopt extreme methods to achieve their goals. And local relations and social networks extend across all groups, often blurring the distinctions between conflict actors.

Where does this leave those of us operating in these complex environments, designing interventions to counter extremism and trying to make sure our actions don’t inadvertently benefit extremists? First, we must be experts on conflict—not just causes and drivers but also actors and networks. We need a deep understanding of the variety of conflict actors, their aims and objectives, membership and alliances. Only through this deep understanding of an often shifting landscape can we design well-informed programs and avoid unintentionally aiding extremist groups. Second, we must remain flexible. Conflict actors are constantly adapting to the conflict environment and so must we. And finally, we must better educate the wider donor, policy, and academic communities of the complexities of addressing extremism in conflict environments and continue to advocate for better informed strategies.